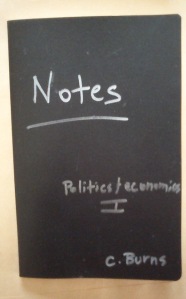 Over the past couple of years, I’ve increased my readings of history, economics and politics, and I think that comes from my determination to better understand the world as it is unfolding, and gain at least a few hints into what the future might hold for those of us who are left vulnerable to larger forces because of our class/caste, income, race, etc.

I’ve kept track of relevant quotes, statistics and observations by jotting them down in a black notebook, filling it to the margins. Recently I came to the last few pages of the notebook and decided to try and distill what I had gleaned from my readings into a mini-essay.

I’ve polished it some, clarified my thoughts in a few places, but tried to retain the surge of inspiration and anger that provoked its composition:

“Now and then I see the truth above the lies…”

Paul Banks, “The Base”

The uneasy truce between capitalism and democracy is breaking down.

At some point—if it hasn’t happened already—we’re going to have to choose between those two opposing ideologies and that choice will define (and haunt) our species for generations to come. Which will it be: a smoothly running corporate machine or our personal freedom?

Slavoj Zizek (among others) insists we’re living in a “late capitalist” world.

Capitalism is in the process of transforming into a more autocratic version of itself—something like China or Singapore, where individual rights, many of the privileges we enjoy as a western society, either do not exist or are drastically scaled back. Doled out in increments by an unholy alliance between state and industry.

It has gotten to the point where capitalism can no longer tolerate the constraints of democracy. Anything that slows or inhibits growth/profit, must be neutered, rendered harmless. And that can be accomplished, for example, through trade pacts that supersede or nullify a country’s legal codes and charters, fatally undermining national social institutions and standards.

Environmental laws, legislation restricting monopolies or policing the financial industry, are anathema to the one-percenters and business elite. They still exist in a magical land where growth is limitless, the stock market their personal Ponzi scheme and there are sufficient resources to sustain their extravagant lifestyles indefinitely.

Their narrative simply does not allow for maintaining a more modest standard of living, conservation, thrift, environmental stewardship…

All their talk of GNP and GDP and TTIP, but they persist in refusing to factor in the short and long term consequences of ruinous, wasteful industrial practices, mindsets that more properly belong to the notorious robber barons of the 19th Century, rather than enlightened and highly educated men and women (okay, mainly men) of today. And the toll continues to mount: pollution and ecological devastation on an unimaginable scale, with all the attendant health problems; a growing disparity between rich and poor; human populations becoming more fearful and anxiety-wracked as they face a future that no longer guarantees food security, let alone the safety and sanctity of their homes and persons.

Clean air, safe food, pure water, human dignity and basic, inalienable rights…these things are non-negotiable. In fact, they are the basis for life itself.

Why would we cede responsibility over such crucial issues to petty bureaucrats and corrupt apparatchiks?

Have we become so lazy and stupid, such sheep, that we would willingly hand the keys of liberty to our warders and bare our throats to ravenous wolves?