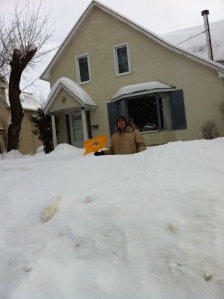 Take a look at this.

We’ve had more snow this winter than in at least a decade. We’ve broken one snow shovel, shaken our fists at the sky and moved God knows how many tons of snow from our sidewalks and property. And, of course, this much snow means a big run-off come Spring. It’s a good thing we’re situated on a fairly substantial hill—hopefully the water will flow down and away from us.

I notice that at 49, snow shoveling is a whole lot less fun than it used to be. I have to take frequent breaks, lean on my shovel, gazing glumly at the white expanse in front of me. Our long driveway has become my nemesis; I joke that it’s an alternative landing strip for the space shuttle. I say even worse things when I’m scraping it off at thirty below. Because as well as being a snowy winter in these parts, it’s also been seasonably cold. Note the choice of words. We’ve gotten off lucky for the past few years, experiencing relatively mild cold seasons. Not this year. 2012-13, we’re getting the real deal. Saskatchewan at its most nasty and inclement.

In the old days, the cold never got to me. I could play road hockey with my pals until our clothes were frozen stiff as cardboard, our cheeks and noses raw and inflamed. Not any more. My body has developed a strange sensitivity over the past decade and I’m prone to awful chills, getting the shakes so bad my jaw locks tight and my body stiffens, arms clamped against my sides, shoulders up around my ears.

I think I’m starting to understand why so many Canadians become “snowbirds”, fleeing to warmer climes as soon as the first Arctic front descends from the north.

But this is Canada, after all, and whining about the cold weather is like complaining that grapes won’t grow on Pluto. There are certain realities you just have to adjust to, certain mentalities you have to adapt.

Be at one with the snow…become your shovel...

Keeping in mind, in six months we’ll be bitching about the heat and bugs. 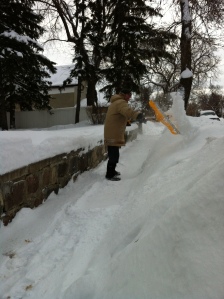