The woman, let’s call her Margaret, pauses at the conclusion of her account, looking up at me with an expression of bewilderment. “I don’t know why I told you all that. You have that kind of face…” She trails off and our conversation concludes not long afterward.

Why did Margaret, a woman I barely know, just spend nearly ten minutes bending my ear about her husband’s fraught relationship with his brother? In the process disclosing many intimate details that should never be passed along to a virtual stranger.

And she’s not the only one.

People tell me things. All sorts of things. Funny and crazy and tragic and personal. People on buses, people who do work on my house, people I’m waiting in line with at the bank…casual acquaintances and complete strangers. Men and women turning to me, a confession already forming in their mind.

“You’re a good listener,” my wife tells me. “That’s part of it. You seem interested in what they’re saying. That’s your first mistake…”

Maybe Yoko Ono is right and there are “a lot of lonely people out there”.  I guess that was part of the attraction of the Post Secret project a few years ago. People dying to get their crimes and misdeeds off their chest…anonymously, of course, their courage only extended so far. Similarly, it’s easier to confess some things to strangers or barely familiar faces than to family members and loved ones. A weird kink of psychology.

I spend most of my time alone, isolated. When I do interact with folks, I’m anxious to talk about anything but my work and dull routine…and that might be at least partially responsible for the true confessions and guilty secrets I’ve been subjected to over the years. Some of them not for the squeamish. And if I make the mistake of admitting I’m an author, there are individuals who immediately perk up:  well, if you’re a writer, you’ll love hearing what’s been going on in my life lately…

But once people start revealing their problems and complaints there’s just no holding them back. I’ve heard about failed marriages, infidelity, felonies and misdemeanors, nodded sympathetically as men and women tearfully surrendered indiscretions they should have been saving for their priest or shrink. I have no right to this knowledge and yet, afterward, feel protective of what I’ve learned, a certain responsibility to be discreet. The sanctity of the confessional. I think folks sense that as well; a quiet, lonely, reclusive man: who can I possibly tell?

It’s very difficult for me to be rude. I detest breaking into someone’s train of thought, interrupting them in mid-sentence because something they’re telling me is inappropriate, better kept to themselves. Politeness has its drawbacks and I’ve endured many an awkward, one-sided conversation simply because I lack the chutzpah to clear my throat, give an impatient frown or simply walk away.

And, anyway, how can you walk away from a young clerk, enormously pregnant, helping me find a stencil set and, meanwhile, telling me about the heart defect that threatens the life of her unborn baby. Thirty seconds after walking into the store. What can I say? How do I respond?

But she’s looking at me, describing the diagnosis and proposed treatment, affirming the importance of faith in her life, talking freely, without a trace of self-consciousness.

Something in my manner or expression assuring her, a sympathy that cannot be feigned.

While I, for my part, refuse to deny her the kindness of a stranger, shared concern for a child in distress.

My time is not so important, surely, that I can’t spare a minute or two to commiserate or console. These meetings, though frequently taxing, part of the burden I bear for having “that kind of face”. 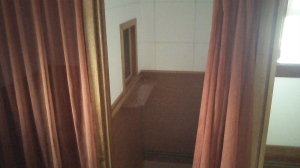