Too little of this:

and too much of this:

I recently read a volume of Wallace Stevens’ selected poems (The Emperor of Ice Cream and Other Poems; Dover Publications, 1999) and one piece in particular stands out in my mind.

“Anecdote of the Jar” appears about halfway through the book. Like all the best poetry, it manages to be, simultaneously, deceptively simple and yet enormous in its implications.

I can’t cite the poem in its entirety without paying a stipend to Stevens’ estate (and more power to ’em), but I can tell you that it succeeds, in three brief stanzas, at revealing humankind as the ultimate invasive species, spreading our cargo cult of garbage and useless detritus to the farthest reaches of our planet. Pepsi cans and cluster bombs dropping like manna from the heavens, a “north Atlantic gyre” of Walmart bags and accumulated human waste and debris, literally an island of filth to navigate around, map and study.

Understand, I know nothing of the genesis or conception of “Anecdote of the Jar”, this is purely my take on it, a highly subjective interpretation. The poem was likely written in the 1920’s or 30’s, long before the full scope of our crimes against the environment was apparent. Was Stevens’ prescient, somehow aware of what was coming? I’m not qualified to answer. I do know that quite often poets are like a canary in a coal mine, detecting dangerous elements and tendencies within our society the rest of us either don’t or (more likely) won’t acknowledge.

Just by its mere presence on a hillside in Tennessee, a jar, the simplest and most basic of objects, defeats that ancient landscape, forever marring it. Nature, in an instant, overtaken and violated, no longer pristine, untouched by human hands.

I think “fair use” permits me to quote two crucial lines:

The wilderness rose up to it/And sprawled around, no longer wild…

That’s what happens when you drop a fast food cup in the woods or toss your garbage from a moving vehicle. A single thoughtless act that spoils the scenery for the rest of us.

And, even so, I beg you, make sure you walk on tiptoes… 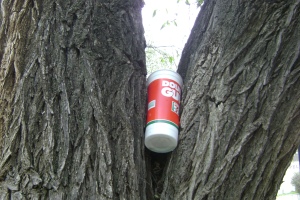