You are the tumult my life requires
out-witting dull routine, monkey-wrenching the works
keeping us ageless despite the slow accumulation of years
possessed by wonder, intimations of a higher power
concealed in the metronomic regularity
of the tides that stranded us here

I think tonight I’ll be selfish,
refusing to disclose the shameful
extent of my passion, withholding
from you those sentiments I
normally share in this context
like a box of buttered popcorn,
except at the moment I find I’m
lonelier than usual, than I should
be, feeling the need to hoard
everything we are, keeping us
all to myself. 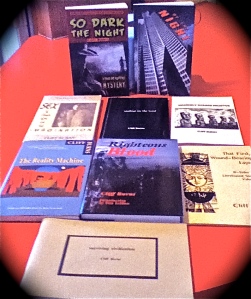 The name is Burns. Cliff Burns.

Indie author and publisher. Creator of weird music and even weirder short films.

You’ll find all the relevant biographical info about me here.

I offer a sizable batch of my stories for free reading and downloading, you’ll find them here.

A number of my books are available for purchase and you can find ordering info here.

I know some of you (many of you? most of you?) view indie/self-published writers with a great deal of misgivings. I don’t blame you. The advent of blogging, print on demand and e-books has led to an explosion of self-published novels and volumes of poetry and the vast majority of them are unbelievably horrible. So bad, I wouldn’t wrap fish in them (real or virtual). In my view, when it comes to self-published offerings, Sturgeon’s Law is too kind—at least 98% of the self-published efforts I’ve tried to read are embarrassingly juvenile and inept. Derivative, tuneless, execrable drek.

Now I want you to pop back to my roster of professional credits, scroll down until you get to the blurbs appearing below them.  I think it’s pretty clear I’m no dabbler.  For the past twenty-five (+) years, day in and day out, I have been putting words on paper.  Writing is my obsession, an essential article of my faith, the activity that keeps me from absolutely losing my mind. Have a glance at one of my stories, a tale like “Daughter”.  If that one doesn’t have you hooked within about ten lines, kid, you’re reading it upside down.

I became an independent author and publisher by choice.  Producing and releasing my own work allows me to present it in the manner I intended; every choice is left to my discretion, from the cover art to the layout. It’s time-consuming, frequently maddening but, in the end, worth it for the control it gives me over all aspects of book production, promotion & distribution.

My books are available through Amazon and can be purchased as e-books from Powell’s, Barnes & Noble, etc.

I hope you’ll take a chance on an author who has taken advantage of the new technologies to present an alternative to the rather dreadful crop of books the trads (traditional publishers) have been releasing since they went corporate and lost their souls. My stories and novels are thrilling, original and literate. They transcend easy genre classification; years ago, someone referred to my odd oeuvre as “Twilight Zone on acid stories” and I suppose there’s some truth to that. I draw inspiration from the surrealists and my work frequently displays more than a passing affection for the macabre.

If you’re feeling a bit flush this month, experiencing a craving for a much-needed mental goose, give some thought to picking up one of my books or downloading some of my stories.  It’s simple, just a matter of a few clicks of your mouse.  Remember how bored you were the last time you walked through a bookstore? Unable to find anything that spoke to your particular zeitgeist. Now’s your chance to veer off the beaten track and discover an author who makes no attempt to cater to the marketplace or kowtow to editors and agents.

But be warned: here there be tygers.  My writing takes a toll on readers who have been lulled into lazy modes of thinking. My fiction is a wake up call, a warning klaxon, a condemnation.  You can do a lot of damage with a steady hand and a sharp scalpel.

Time to check out some of my work. Go ahead. What are you waiting for?  You’re not scared, are you?

This morning I was sitting at my desk and happened to glance out the window, at the ungainly maple tree in our backyard that is always in need of trimming back.

Last night we had a substantial amount of rain.  The air rich with a variety of living scents, pouring into my home office, filling the room.  All at once, I started scribbling…

Some gals we met through a local “Open Mike” event invited my family and I to pop out to their high school and participate in a public reading.

We love to show our support for stuff like that and were delighted to accept.  The only problem is, I needed something new to read.  And over the course of a couple of days, a notion for a short tale presented itself to me, pretty much full-blown.  A few touch-ups here and there but nothing serious.  It’s wondrous when that happens.  All the proof I need that the universe is conscious, sentient and permanently beyond human ken.

The story’s short, vivid, to the point.  Read on…

“Bagshaw,” my father says suddenly.  He’s been silent nearly an hour and his voice gives me a start.

“Who I was talking about.”  Shooting me a stern look.  “The little queer.”  I don’t remember any reference to Bagshaw but, never mind; clearly he’s been off on some kind of mental ramble.  “Worked at head office with me.  A swish, and not ashamed to flaunt it either.”  He pauses to get his breath.  His lips are dry and grey.  Everything in the process of shutting down.  Propped up to help him breathe, Demerol to handle the pain.  He’s making a sound, wheezing, could it be…laughter?  “Lord, how I tormented that man.”

His face is still drawn but animated by something that looks suspiciously like a smirk.  “I’d put thumbtacks and pins on his chair.  Not every day, spacing it out so he’d always be caught off guard.  I was down the hall but I could hear him squeal.  Served him right.”  I’m leaning forward, fists clenched.  Make myself ease back in the chair, force open my furious hands.  He angles his head toward me.  His eyes sunken, lusterless.  Dark holes in his face.  “Other things too.  I’d send him flowers, have them delivered right to his office.  With a card, Love, Charlie or whatever.”

“Sure.”  His thin smile confirming it.

I haven’t seen this side of him before; I’ve often found him thoughtless but never believed him capable of out-and-out malice.  “You hated him that much?”

“Never from home.  Sometimes from other cities.  He’d change his number, get an unlisted one…”  His face crinkling with mirth.  “Didn’t matter.  I worked with the guy.  In Human Resources, no less.  Jesus.  I knew where the bodies were buried and how to find them.  That’s why I lasted so long.”  He gestures for the water glass and I automatically move to comply.  Holding it for him while he sips through a straw.  One final indignity he must endure.

“Sometimes nothing.  Just letting him know I was still out there.  Other times I’d be all…uh…y’know…you queer, you dirty, little faggot…you’ll get what’s coming to you.  Just spooking him.”  I back away, fumbling behind me for the chair.  Then I realize I still have the glass and must rise once more, replacing it on the nightstand beside the bed.  Finding it difficult to approach him again, this stranger I’ve known all my life.

“What was his first name?”

“Couldn’t take it, I guess.”  There’s no remorse, that’s the thing.  He’s talking about running over a dog in the street, thirty years after the fact.

“Hell, no.”  Frowning at his foolish son. “That might look suspicious, give him ideas.  I kept at it six more months.  Just to be safe…”  He’s fading again, ebbing away.  “Old Bagshaw.”  Almost a whisper.  “You know, the bastard actually lisped?”

My father is sixty-four years old and staunchly conservative.  A self-made man.  In our house, he was the one who held the reins and cracked the whip.  Stern but fair, I guess you could say.  My sister sees it differently; she believes mom worked and worried herself to death, trying to please him.

I should tell him.  Right now.  Go over and spit it right into his face.  Just to see his reaction. God.  Wouldn’t that be something?  I’m dying to tell him, I’m about to tell him…but at that moment his mouth sort of sags open and my dying father begins to snore.