I managed to read nine books in the month of January, which (barely) keeps me on pace for the “100 Book Challenge”.

The titles I tackled reveal the diversity of my tastes/interests:  Michael Palin’s latest set of diaries, Halfway to Hollywood, along with some readings on cinema (Dark Knights and Holy Fools), history, science fiction, theology, a novella by Roberto Bolano (Monsieur Pain)…

Yesterday I finished a collection of stories by one of the best English language writers on the contemporary scene, Jim Shepard.

Love & Hydrogen brings together close to two decades of Jim Shepard’s magnificent short fiction.  Here’s the citation I wrote up for Love & Hydrogen in my book journal:

“Jim Shepard is a marvel.  He and George Saunders and Ken Kalfus are the kind of writers who make you want to sweep everything off your desk and apply for a job as assistant manager at the local Dairy Queen.  Aesthetically, they make no mistakes, the scope and diversity of their work dazzles.

Love & Hydrogen displays scope and diversity all right:  in spades.  The stories transit spans of time, the subject matter encompassing everything from the final flight of the Hindenberg to ‘The Creature From the Black Lagoon’.  To my mind, any number of these tales could be included in an anthology of the finest writing of the past fifty years.  I’ve read that Shepard’s research is meticulous and that is evident in historical reconstructions like the title story, ‘The Assassination of Reinhard Heydrich’, ‘Krakatau’, ‘Batting Against Castro’, etc.

There’s a shiver of authenticity present in all of his fiction, an emotional honesty that defies sentiment and still manages to be heart-wrenching.  No one in Jim Shepard’s universe is blameless, everyone complicit; perhaps it’s his version of original sin.  We quickly recognize ourselves in Jim Shepard’s peerless short stories and novels and that (among numerous other things) is what makes him so great.” 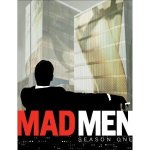 …and along with that reading I’ve been spending most nights of late snuggled up on the couch with Sherron, watching one or two episodes of the first season of “Mad Men” (a Christmas gift from my sons).   Intriguing and addictive.  A little bit more of Don  Draper’s past swims into focus with each episode, some of the murkiness dissipating…and a very scary picture emerging.

Next month:  the first season of “The Wire”.

After “The Wire”, my friend Gene assures me, everything else on television pales in comparison.