The time has come, methinks, to talk about my next book.

I’m a superstitious sod, rarely discussing works-in-progress, except obliquely (even with my wife). If I jabber about a book or story too much, part of me believes I’ll somehow “jinx” things and said offering will wither and die on the vine. So I play things close to the vest, wait until the project has achieved a highly polished state before I finally heave a sigh of relief and officially announce that something new is on the way.

And so it is with my latest novel, Disloyal Son.

This one took my wife by surprise. I spoke of it only in generalities, alluding to some of the history and background my research was turning up. When I finally handed her a finished draft the end of June (2014), she had a vague notion that the book had something to do with my father, the fibs he told us, family stories and rumors we heard as children about the mysterious deaths of two of his brothers…

But I think it’s safe to say Sherron was shocked when she opened the manuscript and discovered…a mystery novel. It took her awhile to adjust her thinking; she expected something much more personal and intimate, along the lines of my radio play “The First Room” (broadcast on CBC Radio some years ago).

The problem with treating the book as a memoir is that at some point I would have to make an appearance—and, frankly, I can’t think of a less interesting person to incorporate into my work. (In that sense, I differ from many writers I can name but, soft, let us move on from that contentious point…)

Nope, it was my determination right from the beginning to approach my father’s shameless falsehoods, his brothers’ deaths, as a fiction writer would, solving those aforementioned ancient mysteries with the tools and techniques of a storyteller. The central character is an author about my age but he’s more of an alter ego than a stand-in; a doppelganger living a parallel life, a “might have been”.

The whole book is a gigantic “what if?”.

But it’s something else too…because there are little truths and facts scattered throughout, bits of family lore

my mother and sisters will get but no one else will. Despite my efforts, there’s perhaps more of me in this book than I intended.

What Disloyal Son is really about is the toxic effect secrets and sins can have on a family, people generations removed from the actual events but still feeling the ripples. The novel is a work of fiction but I think many out there will understand that the themes it addresses have a great deal of relevance to those who live in the shadow of childhood trauma or whose lives have been damaged by a legacy of lies and deceit.

Terrible things go on behind closed doors, many unpunished crimes, including assault, rape, even murder. Whispered about at family gatherings but, for the most part, swept under the carpet. Scarcely alluded to but not forgotten.

Time doesn’t heal all wounds and that’s why the narrator/central character of Disloyal Son is so determined, despite his family’s opposition, to deal with their dark past and uncover the truth about events that took place nearly four decades ago. His efforts lead him deeper and deeper, until he realizes there are actual skeletons in the family closet, the reality far grimmer than he imagined.

That’s all I’m prepared to say about the story line, at least for the moment—I really hate spoilers.

First it was dark fantasy, horror, science fiction, poetry, mainstream literary, a tale set in the Old West…and now this. How the hell am I supposed to draw any kind of readership if I keep shedding skin like a fat snake? No wonder editors and agents shy away from me and even long time fans scratch their heads in confusion and dismay.

No apologies forthcoming from this end. Not a chance. Disloyal Son is a page-turner, a crime novel with the pacing of an Elmore Leonard yarn. Unputdownable. Featuring well-drawn characters, sudden twists and turns and a resolution you absolutely will not see coming. I can’t tell you how pleased I am with the way it turned out—talk about exceeding expectations.

Currently, Sherron is in the process of proofing the manuscript and we should be getting the cover and text files set by the first of April. May Day, 2015 is still our intended release date. I’ve done a couple of mockups for the cover design, which I’ll be passing on to my cover guy, the irreplaceable Chris Kent. And we’re welcoming aboard a new interior layout person, Jana Rade, who runs Impact Studios and comes with stellar recommendations. Hoping for a very smooth and glitch-free production this time around. C’mon, team!

I’ll be “leaking” the cover in mid-April and, meanwhile, devising a much more aggressive advertising and promotional campaign for Disloyal Son. Plugging my books has always been a problem for me—basically, once a book is done I seem to lose interest in it and the only thing I can think about is starting a NEW project, something to get the creative juices flowing again. But my writing deserves better than that and one of my resolutions this year was to devote more time and effort to raising my profile, letting people know I’ve got ten terrific books in print and that over the past thirty years as a professional author I have produced an intelligent and original body of work in a variety of genres. A literary therianthrope.

Watch for my latest offering, Disloyal Son, in a few short months. 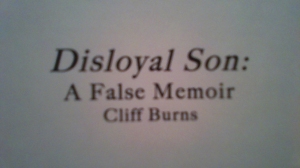 Finally a warming trend around here. February in Saskatchewan has been a spine-stiffening experience; the one saving grace, there hasn’t been massive snowfalls to add insult to injury.

But according to the forecast, the temps will hover around -6 or -8 for most of the coming week. Balmy weather, compared to what we’ve been enduring up ’til now.  Frankly, I always feel better once the first of March rolls around—I can practically hear the crocuses stirring, even under four feet of packed snow.

A flurry of e-mails and communications after my last post and I guess I should have known better. Even by alluding to my novel-in-progress I was opening a can of worms. Now everybody wants to know details about the plot, genre, etc.

Now, you folks ought to know me better than that. I know some writers talk about their on-going projects, post excerpts, furnish plot details and teasers, seeking feedback from fans and readers.

Kids, not even my wife knows more than the absolute bare bones of my current project. I keep my books, stories, poems under wraps until I’m ready to release them to the world. I want her to be surprised, amazed at my audacity (or, just as likely, dubious of my sanity). I seek no editorial input until a project is very near completion…then I’ll pass it on to Sherron and let her pick at it for errors, oversights or continuity problems. As much as I respect my small cadre of dedicated readers, they have no say in any aspect of my work…nor will I make adjustments to a book or story with the aim of pleasing them (or anyone). I don’t write “Choose Your Own Adventure” books, y’know?

Here’s what I will tell you:

My novel is tentatively titled Based on a True Story and it will clock in at around 220 pages (60,000 words). About the same length as my western, The Last Hunt. Genre? Mainstream, crime fiction (of sorts), an old mystery coming to the surface. No fantastic elements whatsoever.

Let’s see, what other questions have people been asking…

Is it a personal project?

Huh? All of my work employs my odd, personal take on things. And while much of it might contain incidents from life, very little of my writing is strictly autobiographical. Characters and situations entirely the product of my fertile and perverse imagination. You wanna write about yourself? Start a fucking diary…

Is it another case for Zinnea & Nightstalk?

Will there eventually be another Zinnea and-–

Yes. When it’s time and I clear some of the other stuff off my desk.

Other projects? Like what? Can you give me an example?

Aha. Good for you. Not a chance.

Why do you take so long to release your books?

Because I want to get them right.

Why are each of your books so different?

I don’t want to get stuck in a rut. Look, my own tastes are wide-ranging and eclectic and I want to see that reflected in my literary efforts. I disdain writers who author the same book over and over again or explore the same universe in a ridiculously long and convoluted series, milking their invented world for all it’s worth. That’s why I’m not pounding out one Zinnea & Nightstalk mystery after another, even though, God knows, that would delight many people out there. I’m not a hack, I’m a creative artist who wants to challenge himself, push the limits of a very finite and modest-sized talent. That’s the way I’ve approached literature for the past thirty (30) years and I don’t see that changing any time soon.

Is this latest book cinematic like the others? Your stuff always seems like it could easily be adapted into movies.

Hmm. Yes, definitely. I see what you mean. And a number of my efforts have been optioned…but it never seems to go anywhere. Last month a film-maker contacted me about one of my novellas and it ended badly. I wrote about it over on my RedRoom blog. It isn’t pretty. Hope it serves as an object lesson to other writers out there who might be going through the same thing. Stand up for yourself and remember: until you sign that contract, you hold all the power. Do your homework and work your ass off to get the best possible deal. Don’t get screwed because you’re humble, shy and/or dislike confrontation. People like that get eaten alive.

That’s it for now. Still have a full day of editing ahead of me. Should be finished this latest run-through (draft #3) in the next three or four days. Then some time off (it’s been 32 days straight of 10-12 hour writing sessions), do some background reading and research and then…on to draft #4.