Okay, sorry, yes, I know, it’s been awhile. These things happen. Don’t forget, I’m an independent writer and publisher, which basically means the work never stops. When I’m not writing, I’m filling orders or sending out review copies or doing promo, trying to spread the word about my work discreetly, a word in the right ear, hoping that approach will eventually lead to a tipping point and then all at once I’m no longer an obscure scribbler from the plains of western Canada, the bastard son of Philip K. Dick and Terry Gilliam, but instead, ahem, a writer of stature.

But I’m always heartened when I glance at the ClusterMap (to the lower right) and see where my visitors are coming from. They originate from every continent and often drop by more than once.  A substantial proportion are downloading the stories and excerpts I make available on this site. Sales of my books may not be going through the roof and I may not be getting rich, but I know for a fact that tens of thousands of people around the world have been/are reading my prose and that’s a thrill. God knows, they need an alternative to the tripe they’re finding at their local, big box bookstore.

And I’m only too happy to oblige. Bring me your bored, your lonely, your frustrated, intelligent readers, appalled by what traditional publishing venues are regurgitating like pre-chewed maggots.

Let me risk repeating myself by saying how great it is receiving your comments and personal e-mails; I’m delighted when a smart, well-read person reaches out, sends a few words my way.  It’s a lonely life and sitting at this keyboard, day in and day out, I sometimes lose focus on real world obligations and duties. Interacting with literate folk is a way of bursting the bubble and re-establishing me in Earth Prime. So keep those remarks and observations coming.

Oh, and here’s a (mostly) true story, with a picture to prove it: 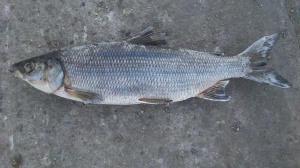 She spotted it first, motioning for him to join her. Both of them bending over it, quizzical and amused. Examining the carcass from a number of angles. She even stopped someone, a complete stranger, pointed at the sidewalk, asking him: “Isn’t that something?”

He grunted, unimpressed, impatient to get back to his preoccupations. Hardly giving it a glance before continuing on his way.

She was outraged. “He didn’t even care! How often does he see something like this?” Gesturing at the sidewalk.

“It’s almost Biblical, isn’t it?” her husband observed. “A rain of fish.”

It came up it conversation a number of times in the following days.  Spontaneous recollections of that moment when they stood over it, speculating on how it came to get there, that spot, like it had been left for them to find. She’d taken a picture with her phone, showed it to her friends but, again, the response was disappointing.

“They didn’t get it,” she complained, her expression wounded.

Every so often she’d cue up the picture, gaze at it, reliving the sense of strangeness she’d experienced when she realized what it was, the incongruity it represented. She found it odd that, try as she might, she could recall nothing of the day in question except coming across the fish. Surely something else had happened. Something memorable and out of the ordinary. She wracked her brain. Had they eaten a good meal or gone to see a show?

It bothered her that she couldn’t remember.

The many hours she had chosen to forget.